Lack of customer focus in E-commerce

TNewspapers are currently printing articles about how e-commerce is gaining market share compared to traditional sales channels. Figures from the Swedish Trade Federation (Svensk Handel) for the 3rd quarter of 2002 show that e-commerce is responsible for 1.7% of Swedish retail trade. Larger e-commerce companies are seeing greater growth in sales, but e-commerce has still not attained broad acceptance across the population. 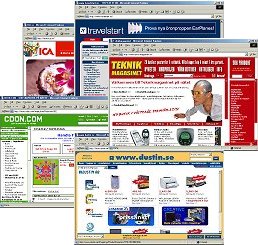 Reliability, delivery times and costs are factors that are often discussed as affecting the success of e-commerce web sites. However, the ease with which a broad range of customers can actually buy products online could benefit from greater focus.

Usability Partners has recently completed an interview study of how 25 Swedish e-commerce companies work with usability in the development of their services. 17 of the 25 selected were willing to participate in the study, and represented a mix of companies that worked mainly with either consumer sales or business sales.

Most e-commerce companies had not come very far in their usability work, with the exception of a few who appeared to have a clearer understanding of the importance of these issues to their success. Company size did not appear to have much affect on the extent to which usability work was carried out.

The companies can be divided into the following categories:

1. Those not working with usability
A few companies had spent little or no effort in adapting their sites to suit users. Comments such as "users are stupid" and "they all have different views so there is no point investigating their needs" reflect an understanding of users being a problem rather than a resource. Three of the 17 companies participating openly stated that they didn't spend any time adapting their services to their users.

2. Those carrying out limited user-focused activities
Most companies fell into this middle category, where there was a clear pattern to how user issues were dealt with. Late in development different types of 'user tests' (usually relatively unstructured) were carried out with users from the target group. After launch then certain adaptions to interfaces were made based on customer enquiries to customer services and/or information from questionnaires.

Its worth mentioning the fact that these activities varied considerably in nature and gave varying results. One positive example was from Bokus (a Swedish Internet bookstore) who were able to cut down their customer service staff by two thirds as a result of design improvements made based on the questions received by customer service.

3. Those working systematically with usability and user-centred activities
Only two of 17 companies had carried out systematic activities to ensure their services meet user needs. Activities that were included early contact with users to ascertain their needs, creation of prototypes that were tested in a structured and repeatable manner with users, testing with disabled users, expert usability evaluations and post-launch follow-up (e.g. by surveys and other ways of collecting customers opinions).

The companies that conducted these activities were satisfied and saw the benefits of closer contact with the customers during the development of e-business services. Both these companies also happened to be ranked among the best in the Swedish computer magazine Internetworld's 2002 ranking of the best Swedish web sites.

Both of these companies were consumer-oriented (not business-to-business). In general the consumer-oriented companies showed more interest in usability, despite the fact that business-to-business e-commerce is significant in volume and here user effectiveness and efficiency are crucial. Indeed it should be noted that project managers from such companies were less interested in participating in the study in the first place.

Conclusions from the results as a whole

The study has shown that, from a large sample of Swedish e-commerce companies, the extent to which usability issues are worked with is relatively small, despite the fact that several studies show the value of such work. In a study from 2001, Jakob Nielsen reported that users fail with 44% of the intended purchases on leading American e-commerce web sites. At the end of the same year, Icon Medialab conducted user tests with a selection of Swedish e-commerce sites, reporting similar results (users were unsuccessful 39% of time).

With such poor results from e-commerce services, even modest improvements in usability will result in significant gains. As e-commerce services are continuing to develop and new projects are starting all the time, it is unfortunate that few companies have yet to start working in a structured and systematic manner with usability issues. Addressing user needs and ensuring ease of use (and thus successful and profitable e-commerce) must clearly be given greater emphasis in development projects.

Drawing a parallel with Internet banking

With millions of customers now using Internet banking services there is no way that banks can afford poor usability - understanding customers and their needs, systematic usability testing and regular follow-up user surveys are central to development work carried out by the larger banks. To be successful and broaden their user-group, e-commerce companies must place greater focus on improving the ease of use of customer interaction with their services. Those that address these issues first will clearly have a competitive edge and find it easier to increase their market share.

Companies participating in the study

We chose the following 25 companies as a representative selection of Swedish companies providing e-commerce services in both the "business-to-business" and "business-to-consumer" area:

Of these, 17 chose to participate in the study.

Did you find this editorial interesting?

You might like to read some of our other editorials.
Please send us an email if you have any comments or suggestions!